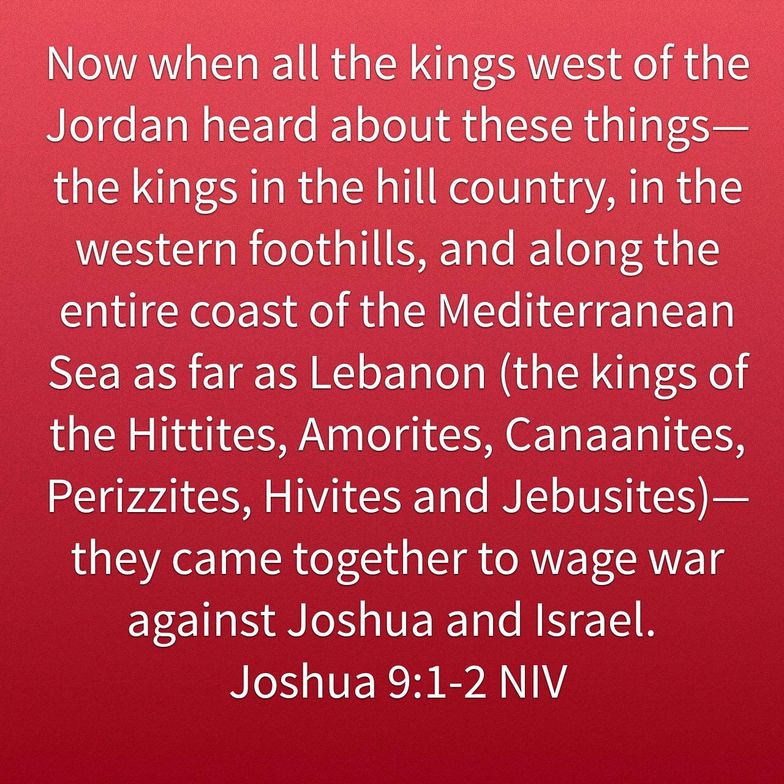 I’ve read Joshua 9 a number of times over the years. As far as I was concerned, the Gibeonites were deceivers and the Israelites made the foolish mistake of believing their lies rather than seeking God’s counsel in the matter. It was all right there in black and white. No nasty “grey areas” to complicate things.

Then along came Pastor Alan and the “unusual story” that was the subject of his sermon. Suddenly, I found myself wondering: Would I be willing to lie in order to save my own life? What about in order to save the lives of people I love? These are the kind of questions the Gibeonites were forced to confront.

Israel’s enemies were well aware that the Israelites had captured the cities of Jericho and Ai. Now there were rumours circulating that the Israelites intended to seize control of all the land west of the Jordan River as well as wipe out everyone and everything that was there. In response to this threat, “all the kings who were beyond the Jordan . . . gathered together with one accord to fight Joshua and Israel” (v. 1).

The Gibeonites, however, formed a different plan – based on a very different understanding of the challenge they faced. They understood that the battle was not really against Joshua and Israel, but against the God of Israel – who led the Israelites out of Egypt and gave them victories over the two kings who ruled east of the Jordan River (verses 9, 10 and 24-26). So, they tricked the Israelites into forming an alliance with them. It was a very elaborate ruse, and it worked perfectly!!

When the Israelites discovered that they’d been outsmarted, they were furious. However, the oath they had sworn prevented them from harming the Gibeonites. So, the leaders decided that the Gibeonites would become servants in the Temple. In effect, those who were formerly “outsiders” had now become “insiders.”

So, what’s the take away for us? Pastor Alan suggested several things. Here are two that stood out for me. First, we need to remember that we ourselves were “outsiders” before being brought under God’s loving care (Ephesians 2:12-14). Second, we need to avoid the temptation to judge those who may not fit our definition of an “insider.” For God has declared, “I will have mercy on whom I have mercy, and I will have compassion on whom I have compassion (Romans 9:15).

Congratulations, Ron as you provide an excellent summary overview of Alan's sermon as found in the book of Joshua 9. I agree with you and have also read this passage of scripture numerous times and tried to ascertain the take-away lesson without much success.

Congratulations and thank you Pastor Alan for your introduction and overview to the context and genre of ruse. The way you explained the story helped me to appreciate a much deeper lesson than I had previously experienced. Of couse, the Gibeonites were seeking to "stay alive" and perhaps, they felt pushed into the corner where their only option was to trick the Israelites into extending their mercy and acceptance. In spite of the fact that the Israelites were furious that they had been deceived = they decided to take the "high road" and thus, remained faithful to their promised alliance with the Gibeonites.

At times, human beings (outsiders) do all the wrong things for all the right reasons. Thank God for New Testament grace and for the words of John 3:16 "For God so loved the world that He gave his only begotten son that whosoever believes in Him shall not perish, but have the gift of everlasting life. "

Roshel over 4 years ago

Thanks for the summary Ron - We were all outsiders at one time or another indeed!