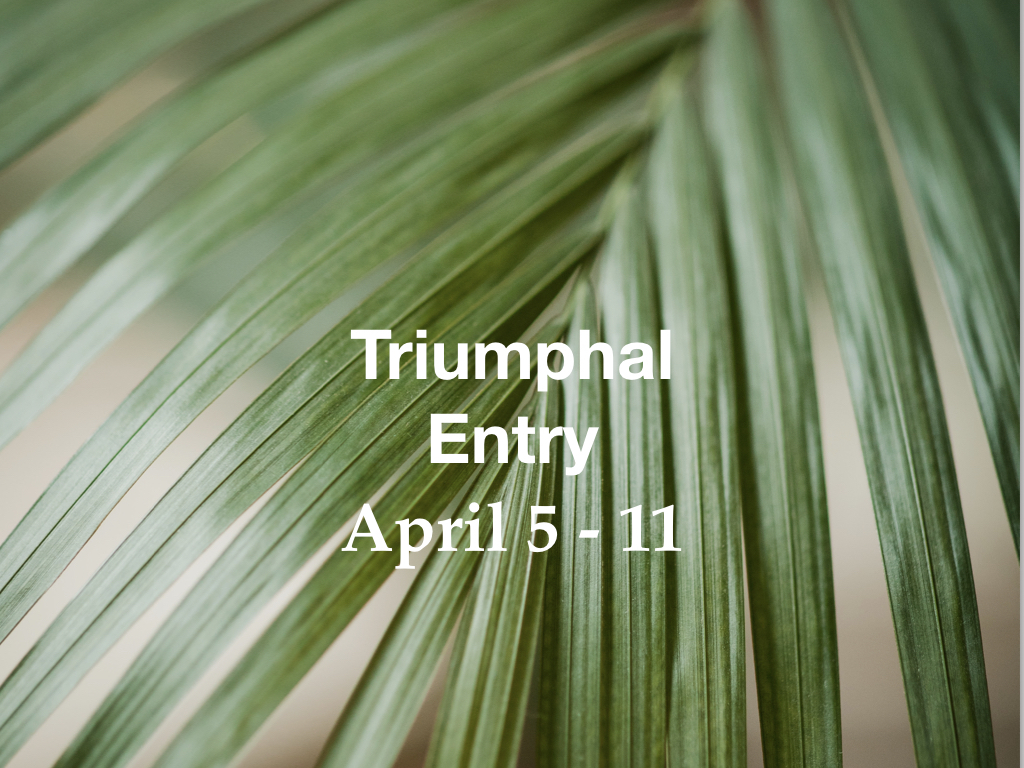 Main Point: People welcomed Jesus as their King and Priased Him

Scripture Verse: “Hosanna to the Son of David! Blessed is he who comes in the name of the Lord! Hosanna in the highest!” Matthew 21:9

Insight to Parents and Guardians

Jesus told them, “You will find a young donkey tied there. No one has ever sat on it. Untie it and bring it here. If anyone says to you ‘Why are you doing this?’ Say, ‘The Lord needs it.’” Jesus would fulfill Zechariah’s prophecy: “Look, your King is coming to you, gentle and mounted on a donkey” (Zech. 9:9)

Jesus made a spectacular entrance into the city. He rode a donkey, and people laid branches and their robes on the ground in front of Him. The people welcoming Jesus into Jerusalem believed He was the promised Messiah, but they expected Him to overthrow Roman oppression and set up and early throne.  Jesus sent a different message.

The next day, Jesus entered the temple and turned over the tables of the money changers and those selling doves. Jesus referred to Isaiah 56:7, declaring that His kingship would not just be over the Jews but over all people. While Jesus was in the temple, He healed the blind and the lame. Jesus’ actions declared, “I am not just you King; I am also your God” (Isa. 35:4-6)

Finally, the priest and the scribes heard the children in the temples worshiping Jesus as their King. “Do you hear what these children are saying?” They asked. Jesus replied, quoting Psalm 8:2: “Have you never read: You have prepared praise from the mouths of children and nursing infants?” Jesus gladly received their praise because He was worthy of their praise.

As you prepare for and celebrate Easter, help your children connect the dots between God’s promise of a Messiah and Jesus’ coming. Help understand why Jesus came: to save the world from sin!

1. March in a parade

Have flags, palm branches, noisemakers, balloons, streamers, scarves and other parade and party items. Put on some music, sing a song, make some noise. March around your house, or down your street as if you are in parade.

Lesson Connection: In today’s story Jesus rode into Jerusalem on a donkey. People spread out their coats and palm branches in front of Him, and they cheered and sang too.  People welcomed Jesus as their  king and they praised him.

Have children write or draw praise to Jesus on a piece of paper.  Wad paper into a ball or “rock”. From one end of the room a throw/roll your rock to the other side of the room.  On your go, run/walk to collect the “rocks”.  Open the paper and read aloud the praise on the rock.  You could also write the scirputre verse on one of your "rock" papers. (shorten verse for younger kids)

3. The Rocks Cry Out

As you go for a walk with your family hunt for smooth, hand size rocks. Rinse rocks. Have children colour, paint the rocks.

Cut out a palm leaf out of green construction paper (fold paper in half and cut a half oval; fringe the sides) OR print of template:Palm Leaf Template. (temaplte from Focus on the Family) You can also may print of a palm leaf here:  Palm Leaf Printable.   Draw or write items of praise on the palm leaves. You could also write the scirputre verse on the palm branch (shorten verse for younger kids).

Lesson Connection:  Jesus and His disciples travel to the city of Jerusalem to celebrate Passover. When Jesus entered Jerusalem, people placed their robes and palm branches along the road before Jesus. They shouted, “Hosanna to the Son of David! Blessed is he who comes in the name of the Lord! Hosanna in the highest! Hosanna means “save now!”

Material and Activites are from the Gosple Life Project - Kids (Life Way), Saddleback Kids, Focus on the Family Kids